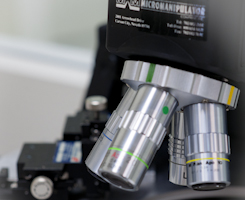 With all failures in the business, no matter the physical cause, the root of the issue is an electrical signal misbehaving. Sage Analytical Laboratories has the tools and techniques to characterize all manners of electrical fails. Electrical characterization for low signal count issues, we utilize our curve tracing tools and micro probing stations to can characterize and verify on-chip fails. For larger signal count electrical characterization, we utilize 1152 automated curve tracing for full device tracing at pin level. This system is capable of providing un-powered and power curve tracing of devices with up to 6 separate internal power supplies, as well as custom current source and level measurements.

In more demanding cases, a custom bench setup is needed to initialize devices into failing states, or create a tailored sequence or system to replicate the failing states. Sage Analytical has a full suite of bench top supplies, generators, and monitoring tools to allow for flexibility in challenging custom applications.

For the lowest level electrical characterization, our multi-probe system enables for some of the most precise probing in the business. By using advanced atomic force probing (AFP) techniques, we are able to probe down to gate level on most technologies, allowing for electrical inspection and isolation down to the smallest features. To isolate failures throughout the delayering process, it is often necessary to probe nets as they are separated to further isolate the source of the failing signal.

Electrical characterization is essential throughout the failure analysis process to verify and replicated the failure modes. With the information gained from probing we can speed our analysis by identifying the most likely scenarios for the fails submitted, and target our flow to protect, and isolate the likely root cause. The resultant report typically includes the variations found between a control and failing unit, the conditions used to simulate the fail, compliance, and any other noted shifts seen throughout the analysis.